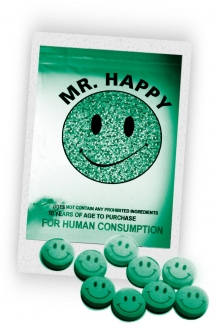 N-BOMe, commonly referred to as “N-bomb” or “Smiles,” is a powerful synthetic hallucinogen sold as an alternative to LSD or mescaline (a hallucinogenic drug made from a cactus plant). There are several variations of this drug, but 25I-NBOMe, often shortened to “25I,” is its most abused and potent form. Effects of only a tiny amount of the drug can last for up to 12 hours or longer.

N-bomb creates a hallucinogenic effect similar to LSD at extremely small dosages. Users report the negative effects and after-effects of the drug are worse than that of LSD. It also mimics the effects of methamphetamine.12

A dose of 750 micrograms, considered an average to high dose, is about the size of six small grains of regular table salt.

N-bomb is sold in liquid or powdered form or on soaked blotter paper. It has a strong bitter metallic taste, and some dealers add mint or fruit flavoring to the liquid and blotter varieties.

As N-bomb creates no effect if swallowed, users place it under their tongue, where it gets absorbed. Some users inject it, smoke the powdered form, breathe it through the nose, vaporize and inhale it, or insert it rectally. Any of these uses are dangerous as only a few grains produce an effect, and it is extremely easy to overdose—with sometimes fatal consequences.

N-bomb is so toxic that it requires a filter mask, gloves and glasses while handling it. This is also a problem for law enforcement officers, as they can get a fatal overdose simply by not wearing protective gear when collecting drug evidence from a suspect.

As N-bomb has been sold under names of other drugs, users may apply the dose of the drug they believe they are taking, which can result in a fatal overdose.

“I felt like my mind had been ripped apart, and I continued to doubt everything that I had ever done or said… I feel I had some sort of post-traumatic stress from this experience. I felt I had developed a social disorder because I could not talk to strangers and I felt like I would have an anxiety attack just looking someone in the eye… 25I-NBOMe was NOT a drug to play with… I will never take 25I again.” —F.M.